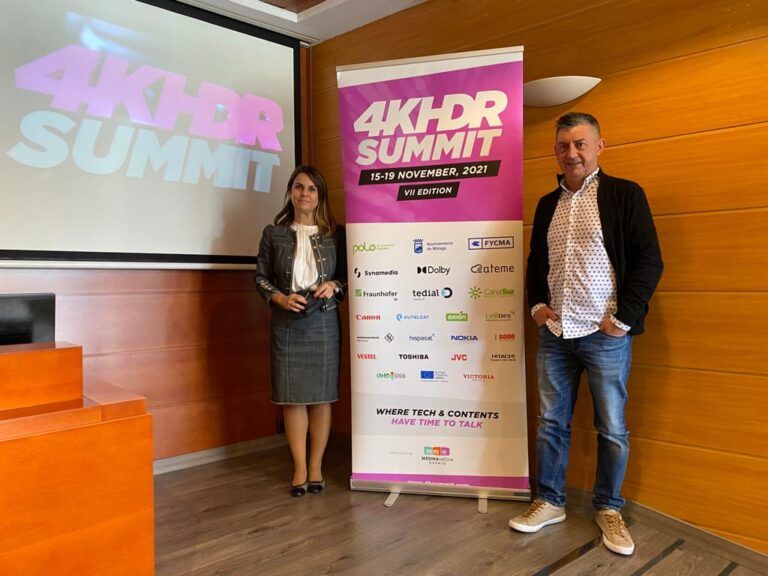 MALAGA BECOMES THE WORLD HUB OF 4K DURING THE 4KHDR SUMMIT

Malaga is once again this year the world hub of Ultra High Definition Television with the seventh edition of the 4KHDR SUMMIT, which begins on Monday, November 15 at the Polo Nacional de Contenidos Digitales at the Tabacalera in Malaga. This event will be held this 2021 in hybrid format, with an opening on-site day and four virtual ones, increasing from three to five days the agenda of the only event that due to its prestige manages to annually reunite the heads of the three world associations of 4K and 8K: the UHD Alliance, the Ultra HD Forum and the 8K Association.

The event, which has been held since 2017 in the Polo de Contenidos Digitales in Malaga, except for the first two editions in Seville, also hosts the first Assembly of the Spanish association UHD Spain and the presentation of the White Book of Ultra High Definition in Spain, among other highlights.

The Councillor for Innovation and Urban Digitalization of the City of Malaga, Susana Carillo, and the 4KHDR SUMMIT Organizer, Ricardo Medina, have presented the program of activities at a press conference.

In addition, top technology companies such as Cellnex, Hispasat, Tedial, Axion, as well as production companies and television channels such as RTVE, Canal Sur, and Movistar+ will be present from the Spanish side.

NASA, the production company of the International Olympic Committee, the British BBC, and the Japanese NHK, among others, complete an agenda with more than 40 presentations that this year has a strong Spanish accent, especially due to the constitution of the UHD Spain association on January 26th in Madrid, but that will hold its first ordinary Assembly in Malaga on the occasion of the 4KHDR Summit.

The agenda of the 4K-HDR Summit this year includes more than 40 presentations over its five days, which will be offered continuously in the morning (from 10:00 to 14:30), afternoon (15:00 to 19:30), and evening (20:00 to 24:30), and that as soon as they are broadcast for the first time will be available to virtual attendees on Video on Demand (SVOD) on the platform of Medina Media Events, the event organizer.

On Monday, November 15, the UHD Spain association will hold its first annual meeting. At the meeting, the 30 members who founded the association in January will welcome new members and, in it will also be the presentation of the White Paper of UHD in Spain, which has been coordinated by Professor José Manuel Menéndez, of the Polytechnic University of Madrid (UPM).

At Polo Nacional de Contenidos Digitales in Malaga, there will also be a demo area where the UHD Spain Association will present the broadcasts that since June are being made in 40 cities throughout Spain of two 4K demo channels (SDR and HDR), the satellite receptions and the channel streaming in tests that could potentially already be seen by more than 50% on DTT and 100% of the Spanish population on the Internet.

Nokia will also surprise attendees on Monday, November 15 with new demonstrations, including AMATISTA: music therapy with immersive video for the elderly over 5G; DISADIS: public safety with image analysis by artificial intelligence over 5G; 5GRECORDS: volumetric video over 5G networks for events and the INGENIOUS project: remote driving of an automatic guided vehicle with immersive cockpit and real-time video over 5G, which will make an exclusive live demonstration at Polo Nacional de Contenidos Digitale’.

The second day, Tuesday, November 16, will be in the virtual format as the rest of the days. The day will begin with Maria Rua Aguete, director of the British consulting firm Omdia, to present an exclusive report on the 4K and 8K development worldwide.

The BBC will close the first virtual day with a presentation by producer Colin Jackson,  from the BBC’s prestigious Natural History Unit.

The third day, on Wednesday, November 17, will be dedicated to Sports, Software solutions, manufacturers, and 5G.

OBS, the production company of the International Olympic Committee (IOC), will be in charge of opening the day with its Engineering Director, Isidoro Moreno, and its Broadcast Engineering Manager, Guillermo Jiménez, to explain details and advances in the production of the Tokyo 2020 Olympic and Paralympic Games, the biggest sporting event this year and the first in history in which Ultra High Definition (UHD) has been the standard for television.

Other sponsors of the 4KHDR Summit such as Canon (Aron Randhawa), Eutelsat (Cristiano Benzi), Hispasat (Jorge Rodríguez), and Cellnex (José Manuel Sanz) will complete the agenda of the third day, which will close with a posthumous tribute to Luis G. Calle, who was Vice President of Operations, News and Sports of the Colombian Caracol Television, a great promoter of New Technologies in television in the United States and Latin America, and who passed away last December in Bogota.

The 5G and UHD will be the common elements to the presentations of the Finnish NOKIA (Pablo Perez) and the German Rohde & Schwarz (Thomas Loichinger), who will talk about the project they are developing in British stadiums to improve the experience of fans at soccer matches and massive concerts.

The US space agency NASA will also be present for another year at the 4KHDR Summit, with its Head of Imaging, Carlos Fontanot, who will show the latest advances with the new cameras used in the mission to Mars and the International Space Station (ISS).

Following this, the head of 8K production at Tokyo 2020 for Japanese public broadcaster NHK (Atsuhiro Hirao) will detail the difficulties and discoveries they have had in producing the 300 hours they have generated in 8K.

The fourth day, called “Presidents’ Day”, will be opened by the Chairman of the Board of Directors of Radio Television of Andalusia (RTVA), Rafael Porras, who as host of the event traditionally welcomes presidents and top executives participating in this unique annual event in the audiovisual world.

The new president of the Ultra HD Forum, Nandhu Nandhakumar, elected in April, will open the turn of the leaders of the three global organizations of 4K and 8K. He will be followed by UHD Alliance president, Michael Zink, and 8K Association CEO, Chris Chinnock.

After their presentations, Nandhakumar, Zink, and Chinnock will lead a panel, in which they will share the current situation of Ultra High Definition worldwide and will welcome UHD Spain, which was sponsored at its conception by the three associations. The Spanish association is the first to have these multiple sponsorships since its establishment, which has placed Spain at the same organizational level in UHD as Italy, France, Germany, and Great Britain.

This meeting between the presidents of the Ultra HD Forum, the UHD Alliance, and the 8K Association, which annually organizes and moderates Ricardo Medina (Medina Media) is the only time a year that the three come together, demonstrating the level of recognition and international respect that have the 4KHDR Summit, which next year intends to expand the number of on-site sessions in Malaga.

In addition, the agenda for Thursday, November 18 will feature the participation of the presidents and founders of four of the most important UHD content production companies in the world: The Explorers (Olivier Chiabodo), Travelxp 4K HDR (Prashant Chothani), Saint Thomas Productions (Bertrand Loyer) and Paramax Films (Amos Rozenberg), who will offer summaries of their latest works in 4K and 8K.

The “Presidents’ Day” will be rounded off by Paul Gray, Omdia’s senior consultant, who, as he usually does, will summarize and draw conclusions from this seventh edition of the 4KHDR Summit.

The last day of the 4KHDR Summit, which this year has a strong Spanish accent, will be dedicated to Ultra High Definition in Spain and its association UHD Spain.

The day will be opened by Francisco Hurtado, CTO of Axion, recently acquired by Asterion, the leading Spanish venture capital fund in the field of telecoms, and will be followed by a report from Antonio Fernández-Paniagua, from the Ministry of Economic Affairs and Digital Transformation, who will give an overview of the current state of the UHD landscape in Spain and its perspectives in terms of implementation.

Afterward, the members of the Board of Directors of UHD Spain, led by its president Pere Vila (RTVE), will share with the attendees of the 4KHDR Summit the progress made since its founding on January 26th and the company’s aims for 2022.

Also on the last day of the 4KHDR Summit, the White Paper will be the protagonist, and the colorist Chema Abad (Deluxe), at Dolby’s invitation, will offer his vision on what HDR means for post-production professionals in cinema, television, and advertising.

The seventh edition of the 4KHDR Summit will be closed by Yolanda Aguilar, general director of FYCMA (Fairs and Congresses of Malaga), on behalf of Malaga and the ‘Polo Nacional de Contenidos Digitale’, and the organization will announce the dates of the eighth edition, in 2022.

ABOUT THE 4KHDR SUMMIT