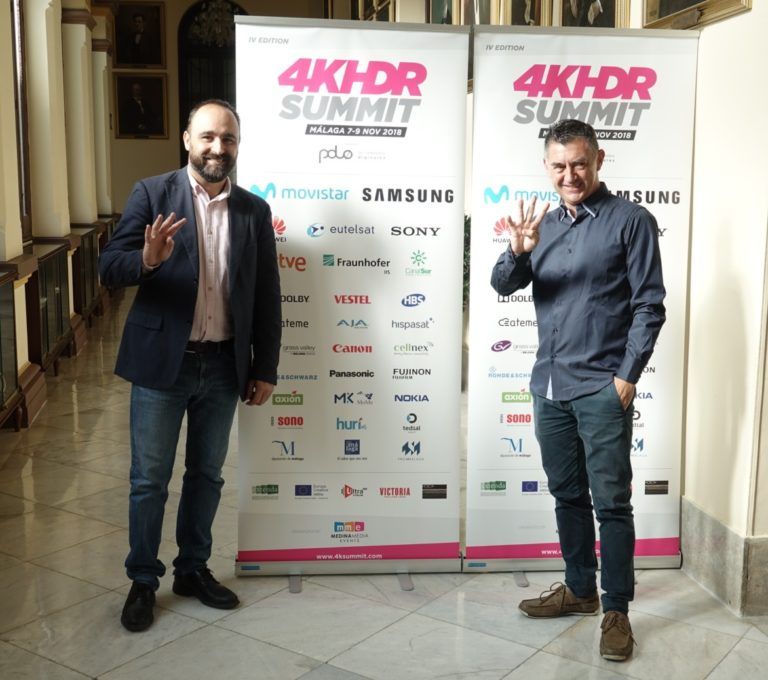 The complete agenda of the 4K Summit 2018 was announced at the press conference.

The agenda of the 4K Summit 2018, presented this morning at a press conference by the Councillor for Innovation and New Technologies, Mario Cortés and by the CEO of Medina Media, Ricardo Medina, includes 20 Keynotes and 7 panels offering reports, proposals and views on this new technology, which for three days in Malaga brings together the best speakers from other international forums such as the NabShow in Las Vegas, the IBC in Amsterdam, the MipCom and MipTV in Cannes, and the Lucca Forum, among others.

According to Ricardo Medina, CEO of Medina Media: “The 4KSummit has consolidated itself as a world reference event. There is no other event in the world that gathers all the speakers of the 4KSummit”.

Mario Cortés highlighted the importance of this technological event for the city of Malaga: “The 4KSummit brings together in Malaga world-class experts, placing on the map in the center of technological cities. 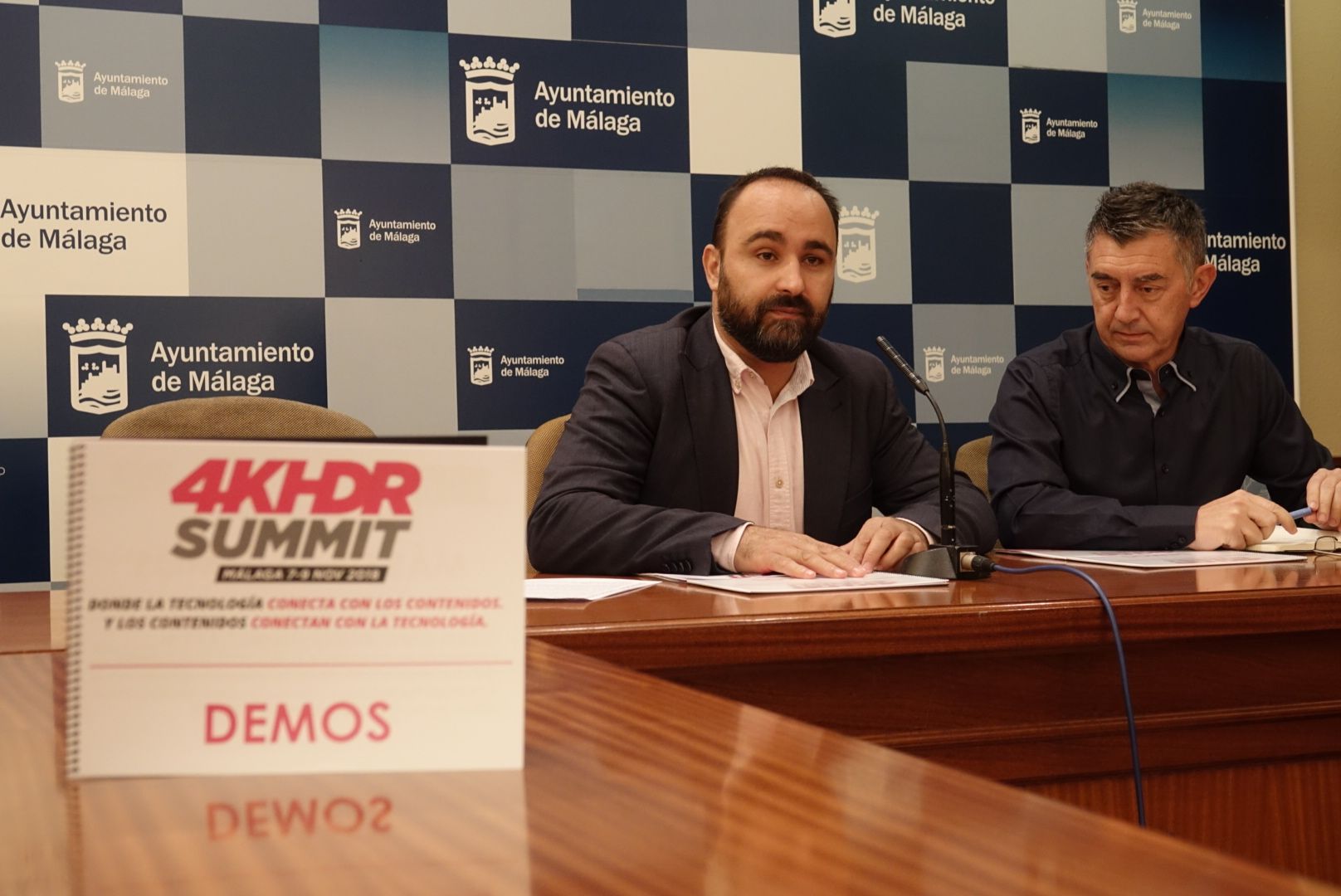 As a novelty in the 4K Summit 2018, the doors of the Digital Content Pole will open on Tuesday 6 November from 16:00 hours to enjoy a previous open day (free access, you can register here) in which the main protagonist of the presentations and panels will be the Branded Content.

Those attending the previous day will be able to see before anyone else more than 20 demonstrations that will be exhibited in the Demo Area and will enjoy the Medina Media Events Welcome Party offered by CERVEZA VICTORIA.

Another surprise announced at the press conference will be the presence of Carlos Fontanot, NASA’s Imagery Manager of ISS, who will show us live images of NASA’s 4K channel.

In addition, the Korean multinational Samsung, one of the main sponsors of the event along with Movistar, will be represented by Nacho Monge, TV & AV Marketing Manager in Spain; and the French Eutelsat by its New TV Formats Senior Vice President, Michel Chabrol.

The consultant Mohammed Hamza, Senior Analyst of the North American multinational Kagan, a division of Standard & Poors Global Market Intelligence, will be in charge of offering the attendees of the 4K Summit the current picture of the 4K worldwide.

RTVE, Movistar+ and Vestel will share with the audience their vision of the arrival of the 4K in homes thanks to the connected televisions.

The importance of audio and music in Ultra High Definition will be addressed on this first day by Yannick Dumartineix, from Radio Télevision Suisse, and by the German Fraunhofer, with his Business Development Director, Alfonso Carrera.

The second day, Thursday 8, will be dedicated to Sports in its early hours. The CEO of the French production company HBS, Francis Tellier, who in collaboration with FIFA organized the television coverage of the 2018 Football World Cup in Russia, will open the space dedicated to the production of live sports in 4K-UHD.

Sony, through Norbert Paquet, will tell its experience as the brand chosen as the main supplier of cameras for the World Cup in Russia, which was the first major global event produced entirely in 4K-HDR.

Next, a panel with Ian Nock (Ultra High Definition Forum), Guillermo Jiménez(Olympic Broadcast Services), Mickaël Raulet (Ateme) and Emili Planas(Mediapro), will review the experiences of 4K this 2018 in other events such as the Winter Olympic Games in PyeongChang (Korea), Roland Garros (France) and LaLiga (Spain).

In the afternoon, it will be time to get to know the new technological solutionsof multinationals such as Movistar (Rubén Mellado), Nokia (Álvaro Villegas), AJA (Kevin King) and the advantages of the 5G of Rohde&Schwarz (Juan Pachón), Cellnex (Xavi Redón) and Hispasat (Daniel Castro).

ANALYSIS OF THE 4K ECOSYSTEM AND WOMEN’S EMPOWERMENT, AT THE LAST SESSION OF THE 4K SUMMIT

Finally, on the third day, Friday 9, the star of the 4KSummit will be Thierry Fautier, the president of the Ultra High Definition Forum (UHD Forum).

Fautier will give his lecture on “Where is the 4K now and where is it going? Next, UHD Forum Communication Chairman Benjamin Schwarz will explain the 4K Ecosystem Map at the industrial and standards level around the world.

Paul Gray, Senior Analyst at the British multinational consulting firm IHS Markit (with more than 16,000 professionals on five continents), will summarise the most important headlines left by the fourth edition of the 4K Summit and offer his forecasts on the evolution of the 4K in the coming years.

The CEO of Extenda, Vanessa Bernad, will moderate a panel in which high executives of the ANTV and Caracol Televisión will participate.

María Camila Villamizar (ANTV) and Johanna Rueda (Caracol) will discuss women’s empowerment on television, Colombia’s commitment to the Digital Content Economy and 4K content, and its support for 4K Americas.

Throughout the three days, networking will be the protagonist in the breakfasts offered by Esca Catering and sponsored by MediaKind in collaboration with Mome, by Axión, Canal Sur and Ultra High Definition Forum; the cocktails with Sabor a Málaga “El sabor que nos une“ and the Happy Hours offered by Cerveza Victoria and sponsored by Medina Media Events and Tedial.

In addition, other Spanish technology companies such as Axión, Tedial, RTVE, RTVA, Hurí and SONO also sponsor the 4K Summit, which has the collaboration of institutions and public companies such as Extenda, Malaga City Council, ProMálaga, Malaga Provincial Council, Europa Creativa Media and Harmonic.