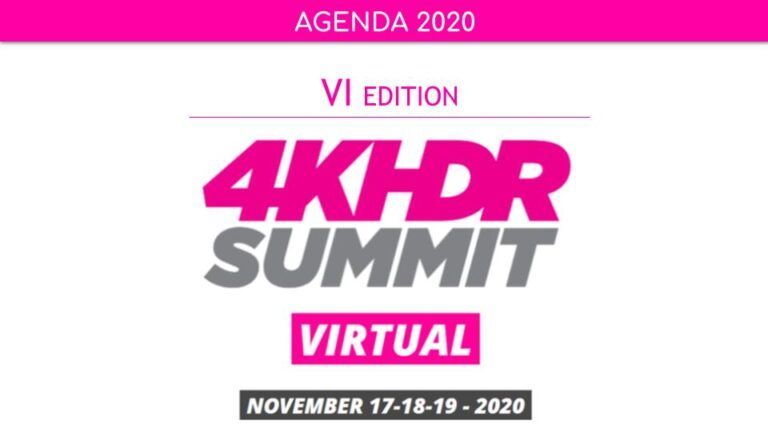 THE 4K HDR SUMMIT PUBLISHES THE AGENDA OF ITS SIXTH EDITION, THE FIRST VIRTUAL

With the question of who will be the “speaker of honor”, which will be revealed in the coming days, the sixth edition of the 4K HDR Summit has today published the agenda of the main global meeting on Ultra High Definition, which this year will be held in virtual format on November 17, 18 and 19.

In addition, UER Video Working Group Chairwoman, Dagmar Driesnack from Germany, will speak on the first day to update the position of European public broadcasters with regard to the obligation to broadcast in High Definition by January 1, 2023. As a success story of European public televisions, Eutelsat‘s Vice President of Video, the Italian Cristiano Benzi, will share with attendees the experience of RAI’s 4K channel.

The second day of the 4K HDR Summit will be mainly dedicated to live sports. The head of 8K on Japanese public television, NHK, Atsushi Murayama, will open the day’s agenda by talking about next year’s Tokyo Olympics. He will be followed by the production company of the International Olympic Committee, OBS, and representatives of other top-level multinationals such as Jason Power, from Dolby; Peter Sykes, from Sony; and Carlos Castán, from Canon.

In addition, within this block dedicated to live sport, Rafa Nadal and his thirteenth victory at Roland Garros will also be the protagonists of the hand of the director of research and innovation of the French Ateme, Mickael Raulet.

In addition to the broad representation of Japanese companies, in this sixth edition, the American company Mediakind; the Norwegian company Appear TV, the German companies Rohde & Schwarz, with Erik Dobberkau, and Fraunhofer, with Adrian Murtaza; the Canadian Ross, with Gideon Ferber and David Estruch; the Turkish Vestel, with Javier Morago; and the Korean Samsung, with Richard Moreton.

The 8K contents that have been selected to be present this year in the sixth edition of the 4K HDR Summit, come from India, with its Travel XP channel and its CEO Prashant Chothani; from the Swiss-French project The Explores, with its CEO Olivier Chiabodo; and the North American Space Agency NASA, with Carlos Fontanot.

This year, OMDIA‘s consultants, Paul Gray and María Rua Aguete, will present two exclusive reports about the implementation of 4K and 8K worldwide, as well as the final conclusions of the biggest event about UHD in the world, organized by Medina Media Events.

Finally, the Spanish Association of Ultra High Definition, UHD Spain, will occupy the closing block of the 4K HDR Summit. On behalf of the Ministry of Economic Affairs and Digital Transformation, Antonio Fernandez-Paniagua, will show in preview the current map of the 4K in Spain, and the projected deployment of emissions in test in the 17 communities. In addition, from the hand of the UHD Spain Association, attendees will be able to learn about the progress being made with the UHD in Spain through presentations by Pere Vila (RTVE), Emili Planas (Mediapro), Xavier Redón (Cellnex), Jorge Rodríguez (Hispasat) and José Manuel Menéndez (Universidad Politécnica de Madrid).