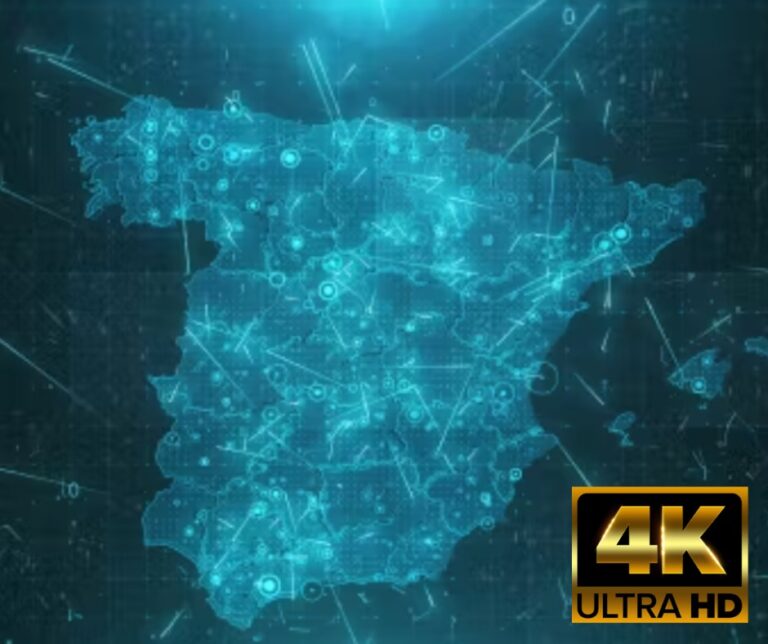 The last day of the 4K HDR Summit 2022 has had more Spanish accent than ever. The UHD Spain Association, the Malaga City Council and the Ministry of Economic Affairs and Digital Transformation have spoken about the current and future situation in Spain in relation to UHD. Antonio Fernández-Paniagua, Deputy Director of Planning and Management of the Radioelectric Spectrum, has revealed several interesting aspects with which it is intended to pave the way for the implementation of UHD in Spain.

“All television channels, whether local, regional or national, have to evolve their High Definition broadcasts before January 1st, 2023, although the decision has been made, by means of another Royal Decree, to extend this period until January 14th. February 2024”.

With regard to experimental broadcasts in UHD in Spain, Antonio Fernández-Paniagua anticipates that “they have been authorized in practically all the provincial capitals and in some additional important cities. All this is aimed at making an evolution to high definition on the established dates and to prepare a future evolution both to UHD and to more efficient transmission technologies such as DVB-T2”.

Susana Carillo, Delegate for Innovation and Urban Digitization of the Malaga City Council, has shown the innovative value of Malaga as a benchmark in southern Europe. “During these years, Malaga has been a true ‘living lab’ for testing technologies in our city. This has made it consolidate as a true technology hub”.

Looking ahead, we face a great challenge such as the 2027 Expo, whose candidacy is being evaluated, and for which we are awaiting a resolution to give the final support to a city that is committed to innovation and technology in all its areas,” she concluded. 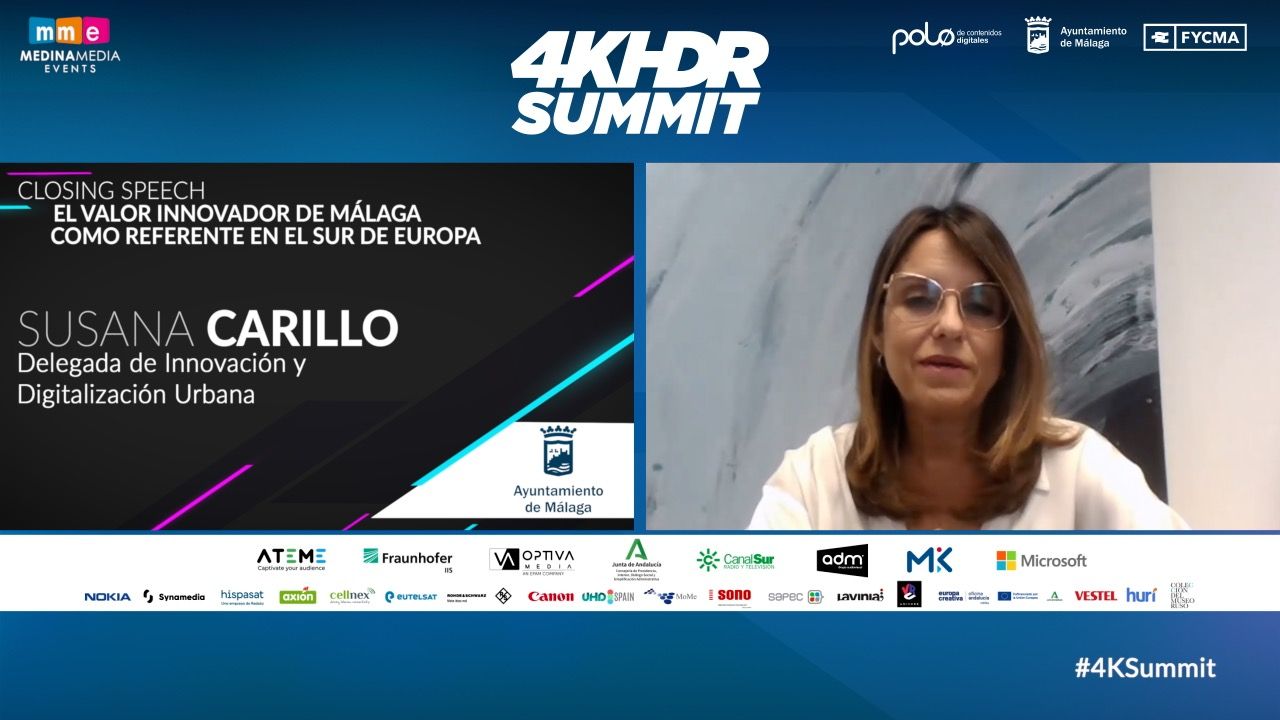 Lastly, Carillo stated that Malaga is becoming the capital of the Metaverse: “The Spanish Chamber of Commerce has granted us 2 million euros in aid to set up the first high-tech incubator in Europe dedicated especially to the Metaverse and the technologies associated with 6G, 4K, artificial intelligence, cybersecurity…, etc”.

The UHD Spain Association has taken over a large part of this last day. Pere Vila, President of UHD Spain, has before him several important challenges regarding his Association, among which are “for the industry to play in the 4K Champions League” in order to “present ourselves at national and international events with the face very high”. 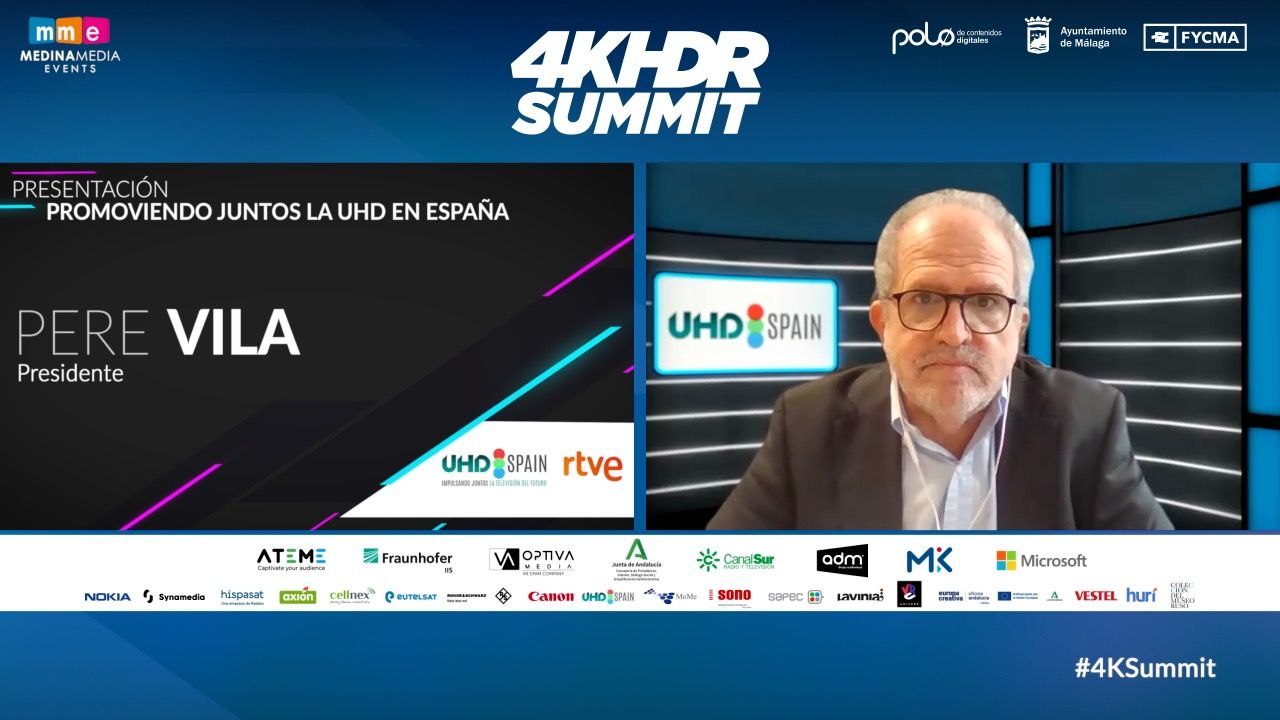 Regarding the year 2022 for UHD Spain, the launch of a UHD Signal Production and Broadcasting Course in collaboration with the Polytechnic University of Madrid stands out. As Pere Vila himself explains, “working on aspects of next-generation audio capture and reproduction in sporting events.”

Another of the challenges that the Association has had to face this year has been “UHD streaming”, something that makes it clear that the approach has gone beyond “a single technology”, according to Vila.

Undoubtedly, what for many has been one of the great moments of the event and of course today, has been the presentation of the second edition of the UHD Spain White Paper. It has been presented by José Manuel Menéndez, Professor at the Polytechnic University of Madrid: “The second White Paper has new chapters such as the audio signal, the encoding of the video signal or the emission of the UHD signal. We will continue with the activity of the Association’s working groups in terms of UHD signal capture, transport, post-production, encoding and reception”. 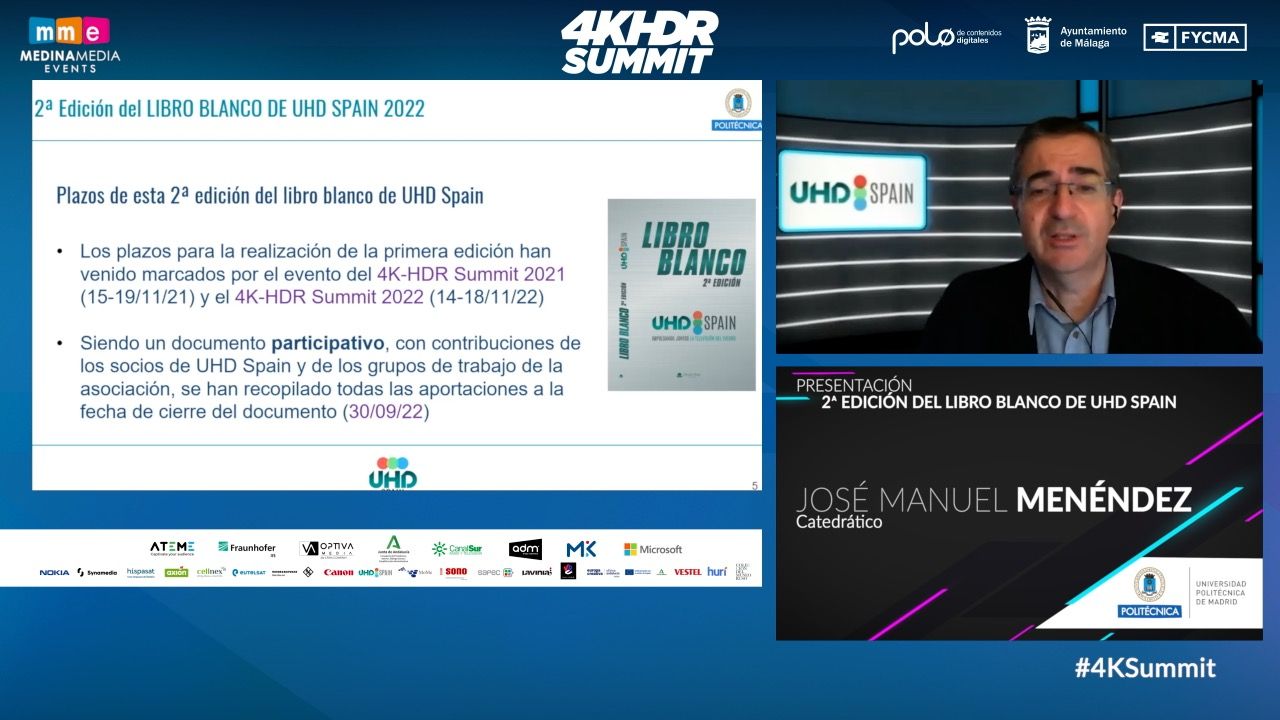 Also, another great book related to Ultra High Definition has been released. “Basic theory for the UHD-4K and HDR camera control operator“, whose author is Francisco José Espinosa “Tilano”, a well-known worker at Canal Sur and collaborator of UHD Spain: “At first I was somewhat skeptical about 4K in Spain. Now it is clear. Platforms are betting on 4K in different HDR variables”. 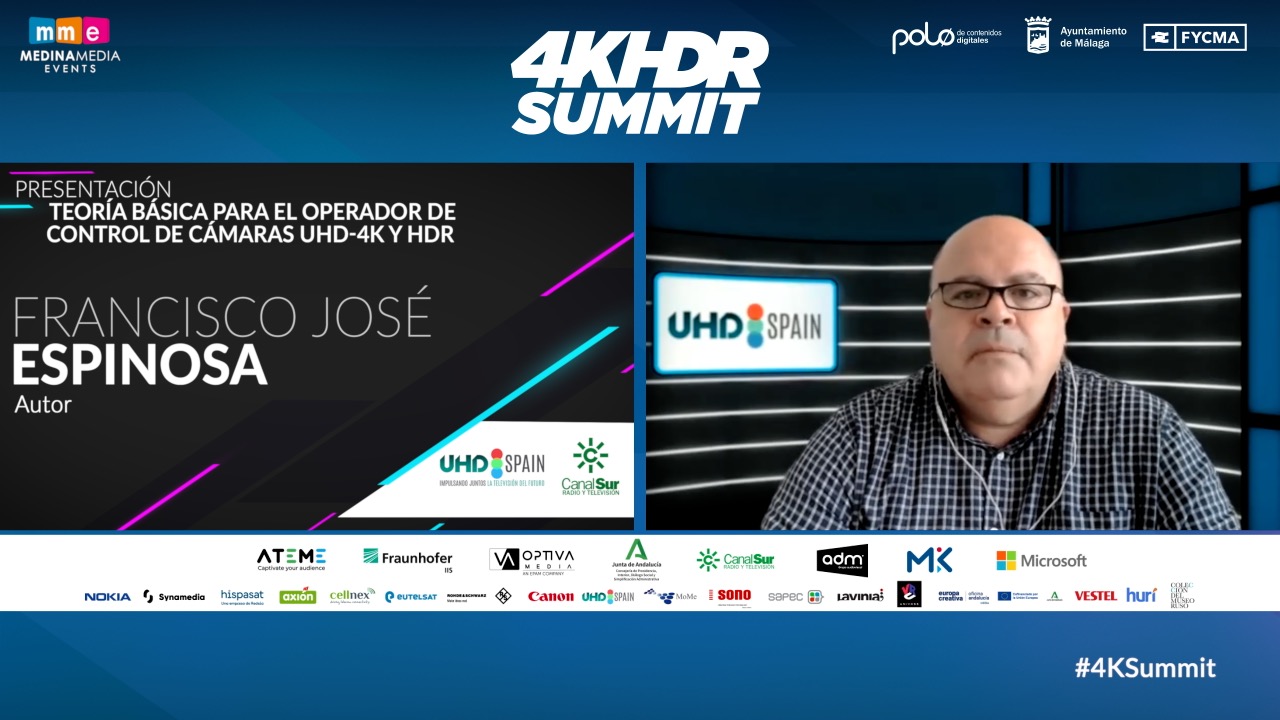 The evolution of television with UHD Spain

Xavi Redón, Vice President of UHD Spain, wanted to show the objective pursued by this Association. “From UHD Spain we are betting on reaching a common objective that is none other than the improvement in the quality of television.” In Spain, more than 70% of the audience comes from DTT. “In other countries, this is not exactly the case. This is the reason why things are done differently in Spain when it comes to the distribution of UHD content on DTT”. 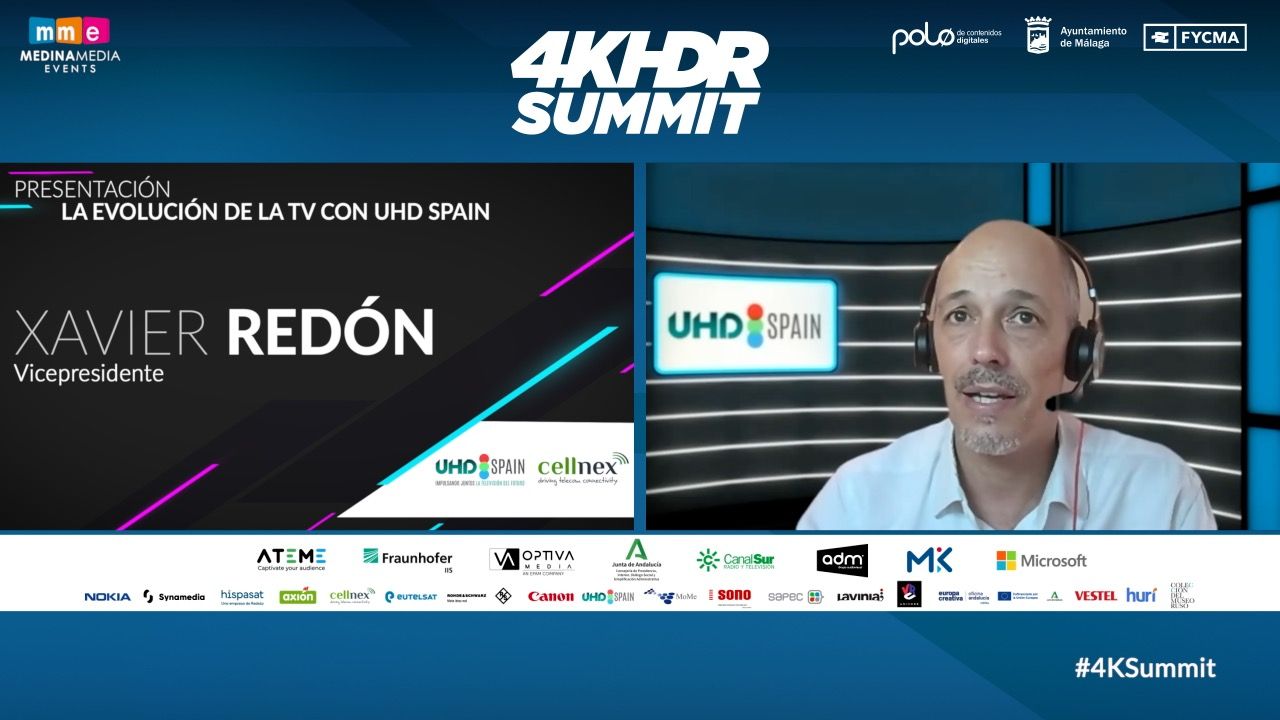 Emili Planas, Member of the Board of Directors of UHD Spain, has been in charge of drawing conclusions about what 2022 has meant for UHD Spain. For Planas, “2023 is a year in which Ultra High Definition is going to have the relevance that it should have had 2 or 3 years ago“. Despite this, the intention to learn from other markets in order to cover their own needs has always been present. Planas has also left another interesting reflection for this coming year. “The market is going to begin to value in a much more massive way what the UHD concept means. The viewer already gives importance to the increase in quality and to the parameters of the Ultra High Definition concept”. 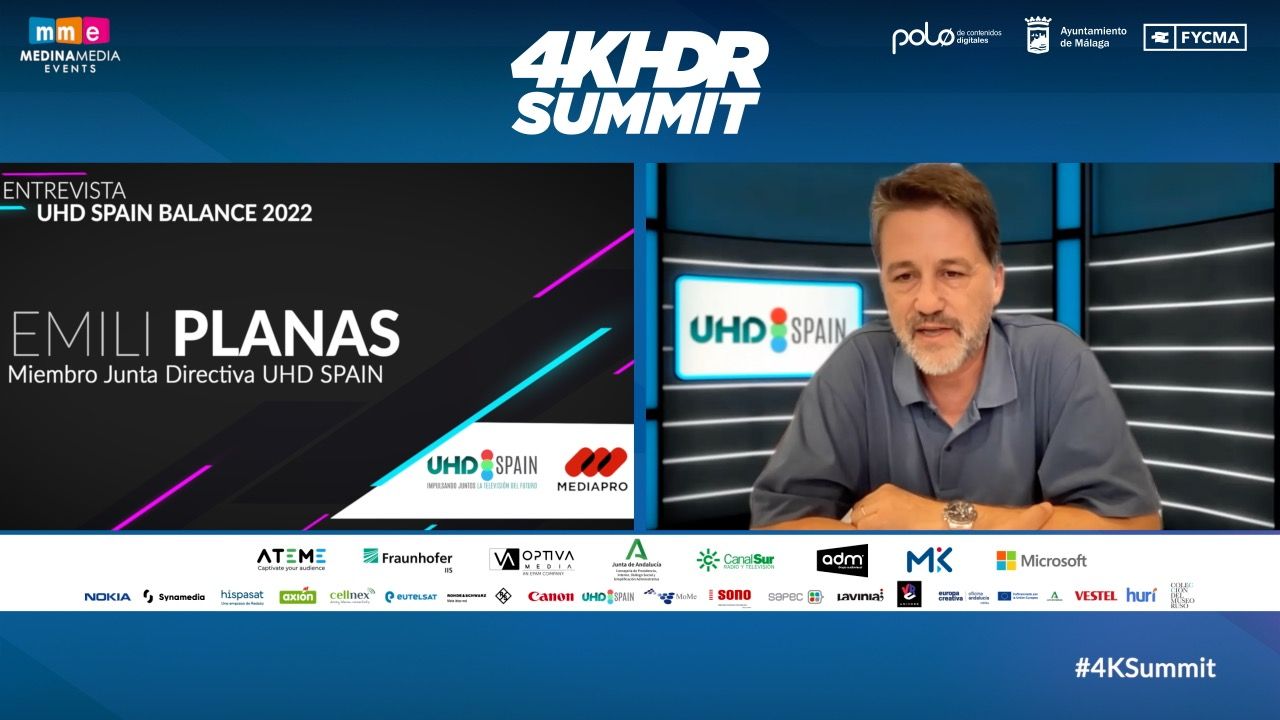 On the other hand, María Medina, Member the Board of Directors of UHD Spain, has shelled everything related to the communication field in UHD Spain, from where special emphasis has been placed on the promotion of the Second Edition of the UHD Spain White Paper in order to “to make it known among institutions and other associations”. In addition, María Medina wanted to highlight the “big challenge this year” for the communication department of UHD Spain. It is about ‘Your UHD zone’: “From the association we wanted to share all the content that has been generated through the video meetings so that any user who was interested in UHD would have access to these video meetings”. 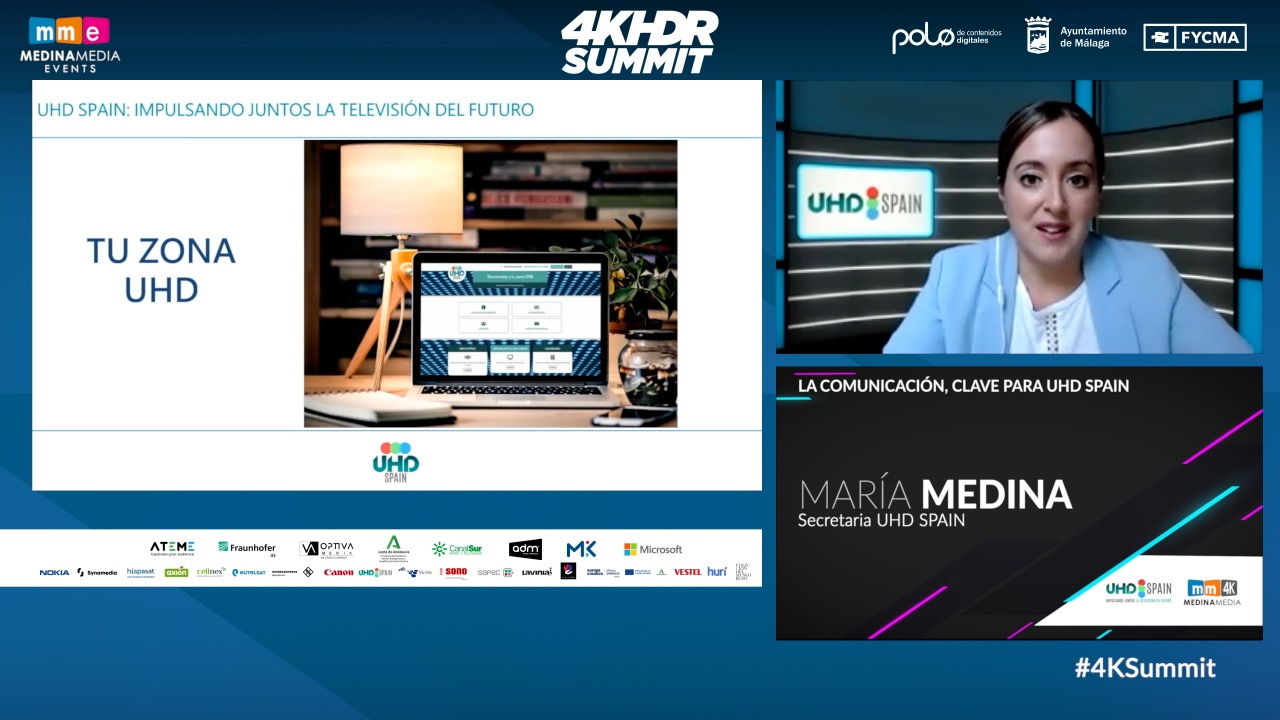 Jorge Rodríguez, Member of the Board of Directors of UHD Spain, wanted to put the situation that the UHD is going through in Latin America in context. “The technological backwardness that exists in Latin America will allow us not to make the same mistakes that we have made before.” “Looking ahead to 2023, we must intensify our work in Latin America and start doing some common transmissions. I don’t know if by the same 2023 or maybe later. 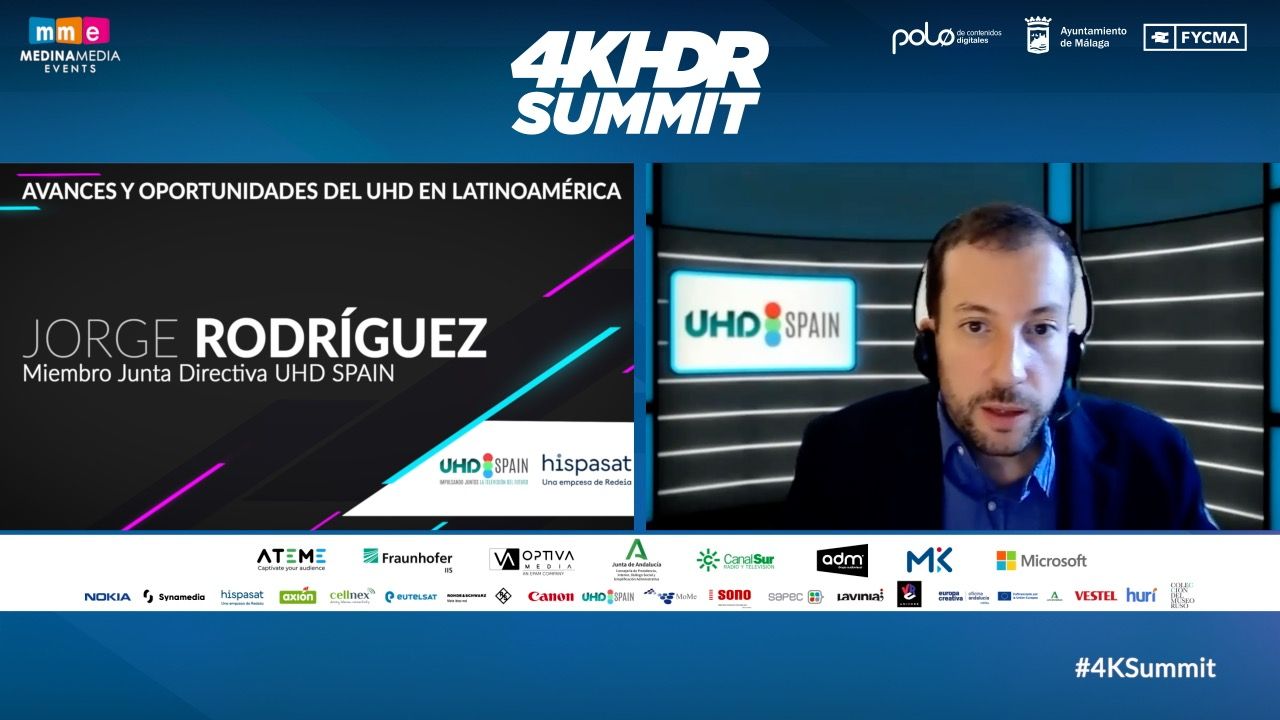 Eduardo Valencia, Member of the Board of Directors of UHD Spain, has placed special emphasis on digitization to move firmly into the future: “It is essential that Spain have an Industrialization strategy to get out of the crisis. In this process, digitization has to play an important role. Innovation generates wealth and is a source of employment. The most innovative companies tend to be more competitive”. 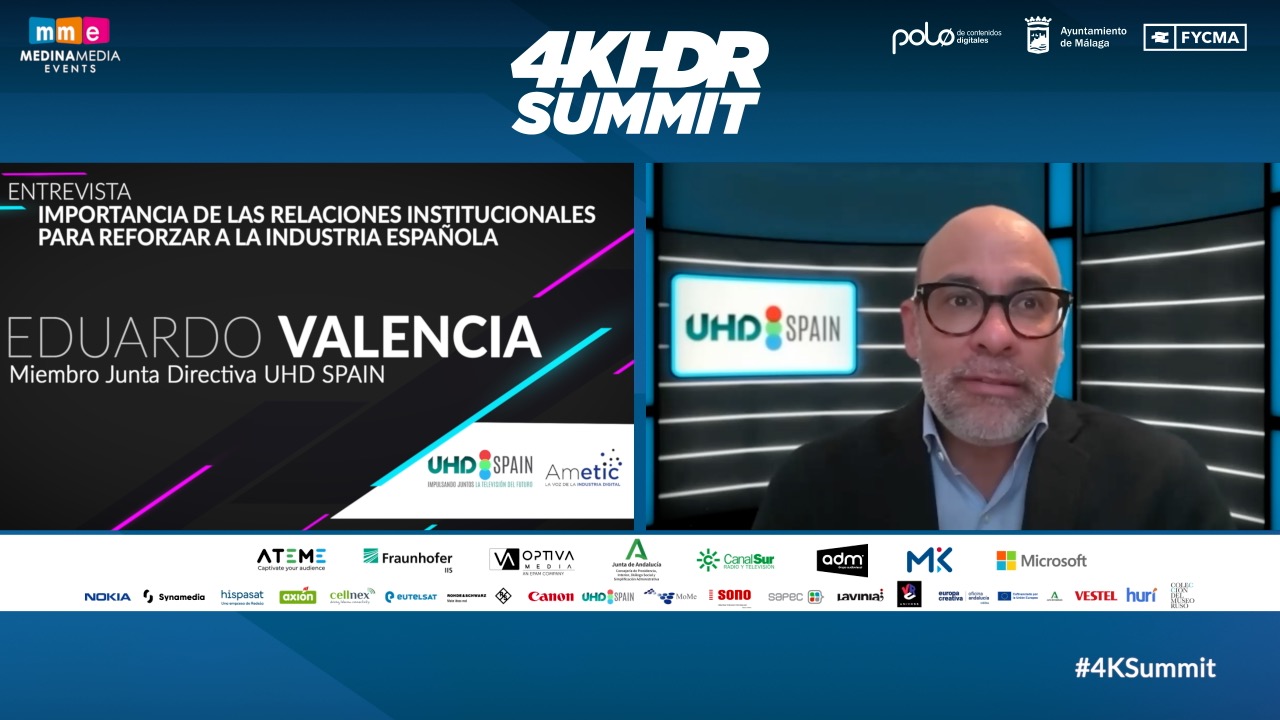 At UHD Spain, the role played by all its work groups is very important in order to consolidate short and medium-term objectives. One of them is the Production group. Yeray Alfageme, who is its Coordinator, wanted to highlight “the use of cinematographic means in productions of live events. The truth is that it has been very interesting. Also, movie cameras are being used in sports broadcasts to create a closeness of the spectator with the action”. 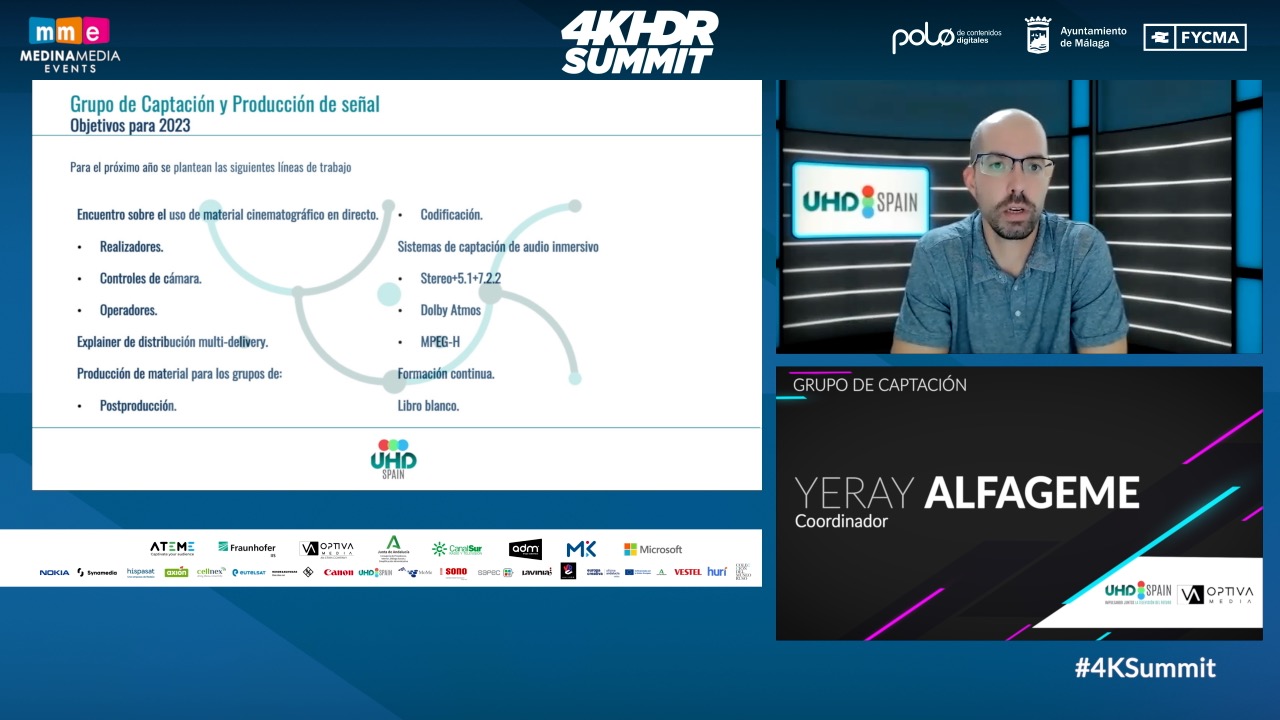 Another of the working groups is that of Post-production, whose coordinator is Xavier Bonet. He has highlighted a project that is “one of the projects that he has been most passionate about”. It is about “the possibility of making an immersive audio project in NGA using video post-production software. We made the recording into a video clip in UHD at 25p on an HLG curve. In addition to a locution in three languages ​​(Catalan, Spanish and English). Also, there was a band of effects and another of music”. As a result of all this, the user would have “the ability to interact with the audio content to see the editing possibilities offered to the viewer to adapt listening at home.” 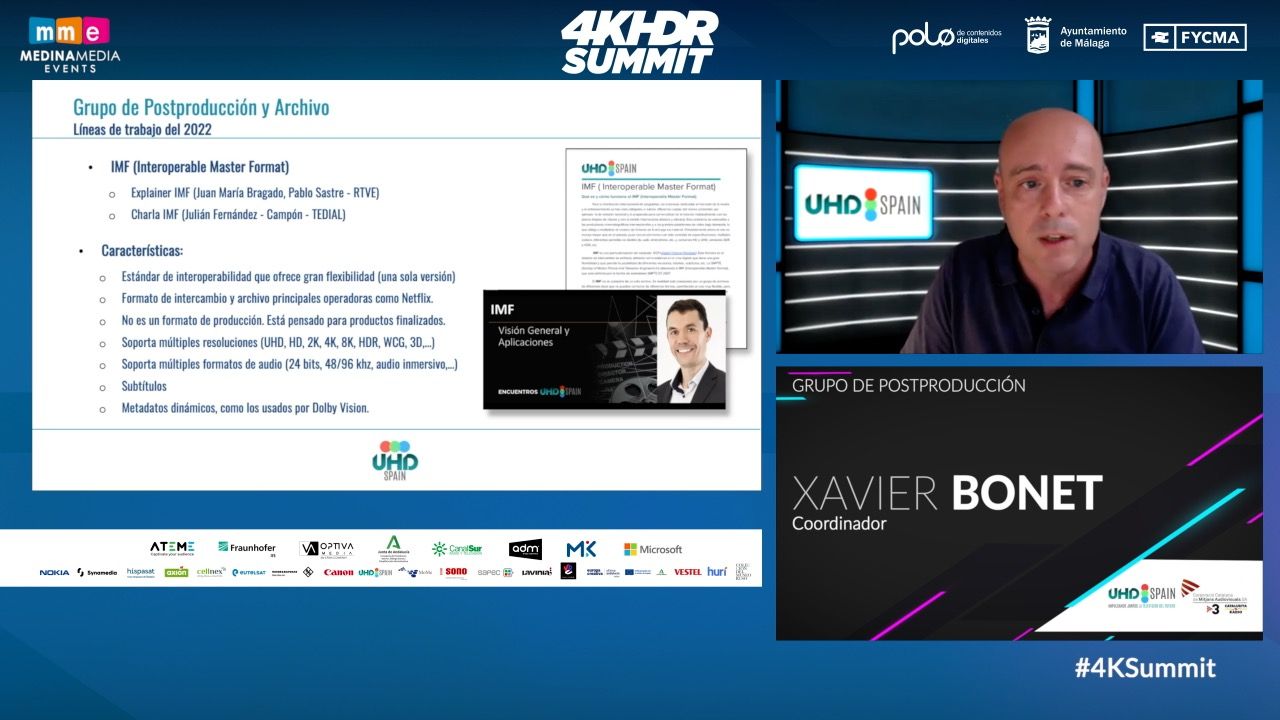 Elena Burdiel, Encoding Coordinator, has also been one of the protagonists of today’s session. This group analyzes, among other things, aspects related to the compression of audio and video signals. “Historically, and from experience, every few years there is a jump in the number of bits we save in the signal. It is about giving the highest possible quality and at the same time saving as much as possible, that is, using the minimum bit for maximum quality”. 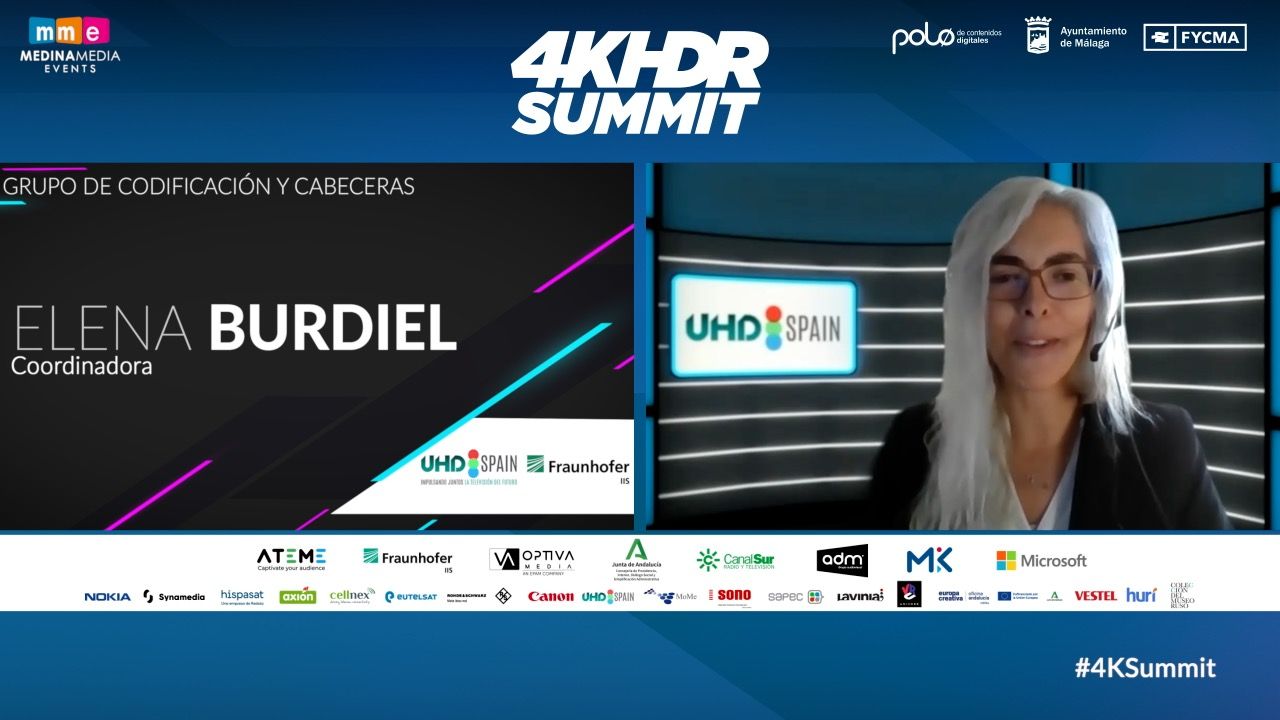 Xavi Redón has also spoken about the Broadcast work group. In a year with many activities and which has turned out to be very productive, Xavi highlights the technical tests. “Currently there are DTT broadcasts in tests from 53 centers, covering approximately 60% of the population. In almost all provinces we have UHD. This represents a great effort and demonstrates the involvement of the different operators”.

On the other hand, Sonia Valladares, Reception Coordinator, has provided one of the keys to the success of UHD Spain. “We had monthly meetings that turned out to be authentic knowledge and research talks. Looking ahead to 2023, we plan to collaborate with the other groups and continue with monthly meetings and following the general objective of the Forum on frame rate conversions. 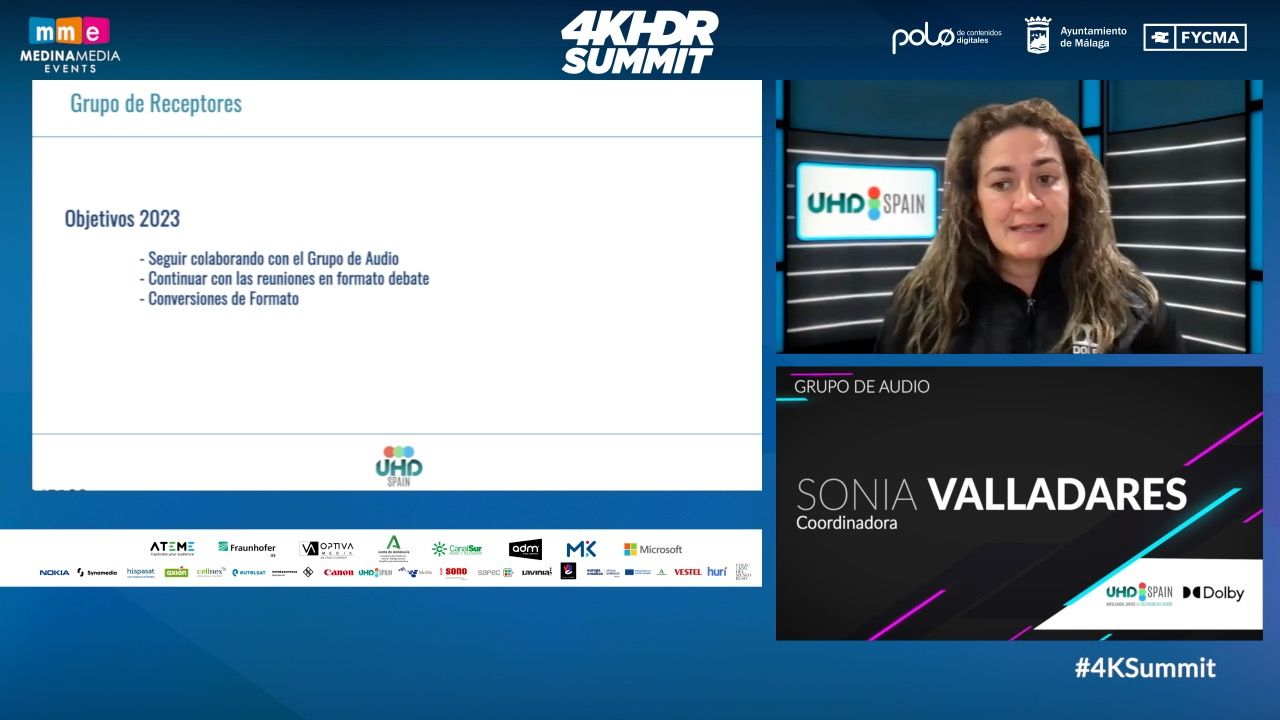 Miguel Ángel Cristóbal, Test Coordinator of UHD Spain,, has detailed everything related to the technical tests carried out during 2022, on which “there has been very important previous work”. “The television market is ready for the development of a UHD channel“. However, an improvement in quality is not always as positive as it seems. “There is a time when quality improvement is asymptotic. No matter how much the bitrate increases, the quality gain will be so small that it won’t be worth the cost of transporting that bitrate”. 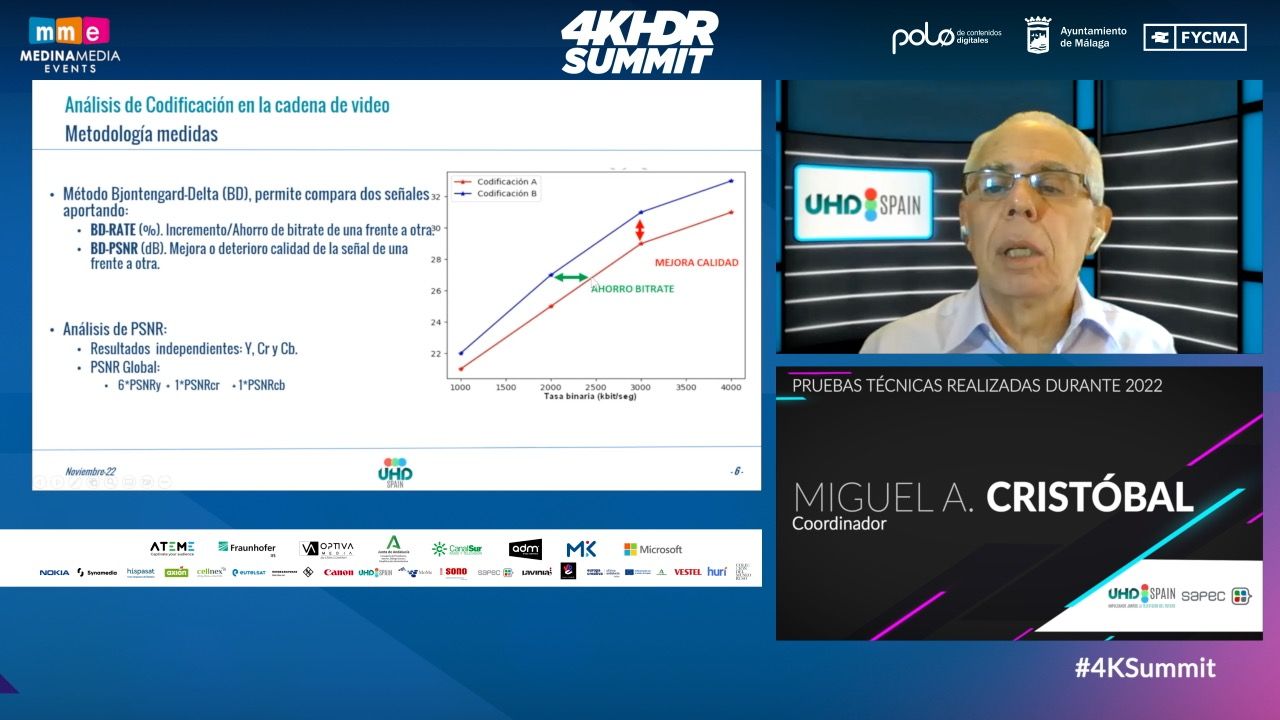 One of the novelties in 2022 at UHD Spain was the creation of a specific working group for Audio. The joint coordination of this working group fell into the hands of Elena Burdiel and Sonia Valladares. “Our work is informative. We want to bring the benefits of next-generation audio enhancement closer to the world, which means an improved experience for the user, who, once they know the benefits, doesn’t like to go back.” 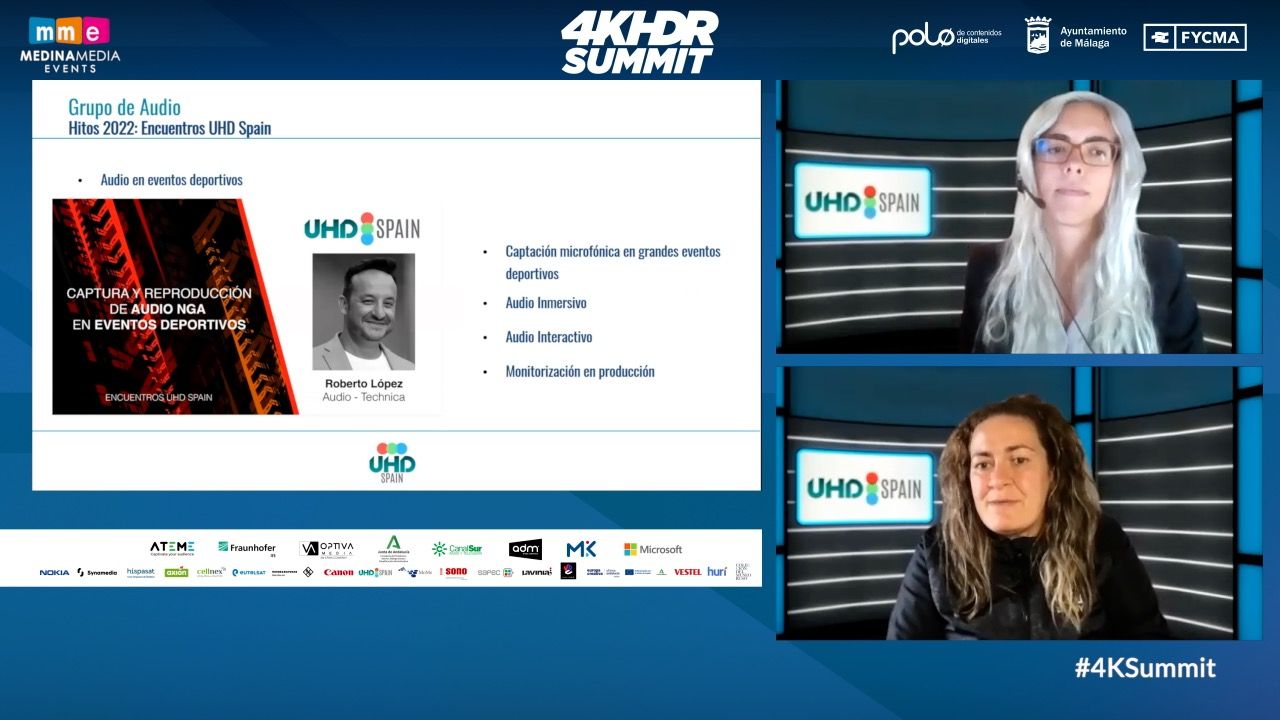